Bird of the Week - Vlll 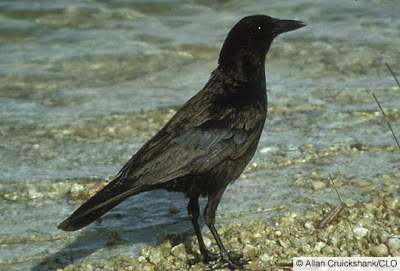 This week's "Bird of the Week" is the American crow. The crow is widespread, common, obvious, and known to most people. What a lot of people don't know is how complex their life is. Young crows remain with their parents until they can find a home of their own, and individual relationships may last years. Young American Crows do not breed until they are at least two years old, and most do not breed until they are four or more. In most, but not all populations, the young stay with their parents and help them raise young in subsequent years. Families may include up to 15 individuals and contain young from five different years.
American Crows congregate in large numbers in winter to sleep in communal roosts. These roosts can be of a few hundred, several thousand, or even up to two million crows. Some roosts have been forming in the same general area for well over 100 years. In the last few decades some of these roosts have moved into urban areas where the noise and mess cause conflicts with people.
The American Crow appears to be the biggest victim of West Nile virus, a disease recently introduced to North America. Crows die within one week of infection, and few seem able to survive exposure. No other North American bird is dying at the same rate from the disease. If you see a dead crow, do not pick it up! Tell your parents about it.
The American crow is omnivorous. This means it eats food that is animal or vegetable. Things such as waste grain, earthworms, insects, carrion, garbage, seeds, amphibians, reptiles, mice, fruit, bird eggs, roadkill, and nestlings are part of it's diet.
The male and female Crow look alike, however, the male averages slightly larger. Crows live in out area year round. It's common call is a harsh "caw." It also has a variety of rattles, coos, and clear notes.
To learn more about the American crow and to hear it's call, click on the this link:
http://www.birds.cornell.edu/AllAboutBirds/BirdGuide/American_Crow_dtl.html
Posted by Mr. Williams at 9:23 AM