Bird of the Week - Vll 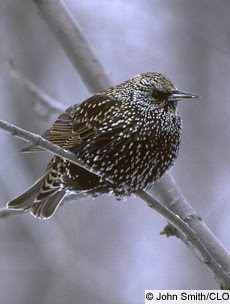 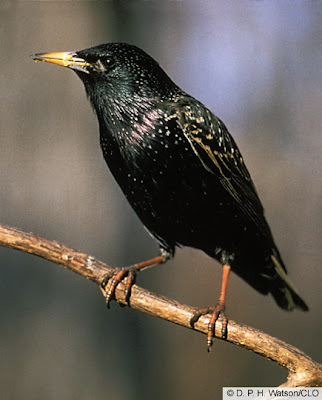 This week's "Bird of the Week" is the European starling. The Starling is not native to North America. All the European Starlings in North America descended from 100 birds released in New York's Central Park in the early 1890s. Today, European Starlings range from Alaska to Florida and northern Mexico, and their population is estimated at over 200 million birds. Its successful spread is believed to have come at the expense of many native birds that compete with the starling for nest holes.
The Starling is a stocky, black bird with a short, square-tipped tail. It is about 8 - 9 inches long. It has pointed, triangular wings and has a long pointed bill which is yellow in the breeding season (spring and summer). It has shimmering green and purple feathers in the spring. The male and female birds look very similar.
While many Starlings migrate, some do winter over in our area. Starlings eat many kinds of invertebrates, fruits, grains, seeds, and garbage. They forages(look for food)in open, grassy areas. They feed in large flocks, often with blackbird species. Starling nest in cavities (holes) in trees.
For more information about the European starling and to hear it's song, click on this link:
http://www.birds.cornell.edu/AllAboutBirds/BirdGuide/European_Starling_dtl.html
Photos taken from All About Birds.
Posted by Mr. Williams at 10:41 AM