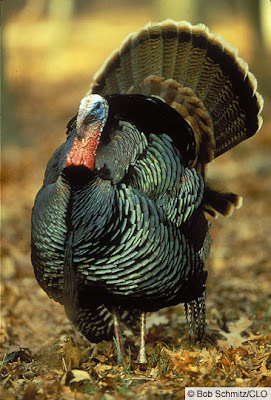 This week's "Bird of the Week" is the Wild turkey. If you have ever seen a Wild turkey, you can't miss it! They have a bronzy iridescence to their body feathers and their wing feathers are barred black and white. The male is much larger with a more prominent beard, and it's head and neck are completely bare, often with a blueish color and with red wattles. A wattle, or beard, is the skin that hangs from the turkey's throat. 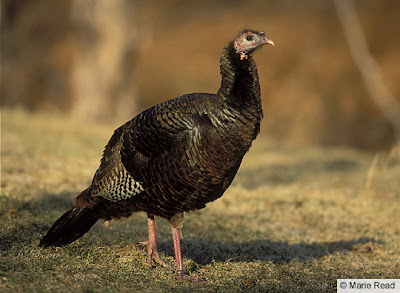 The male Turkey, called a tom, gobbles to attract females, called hens. When she appears, he struts around her. He has his tail fanned and held up vertically, lowers his wings so that the wingtips drag on the ground, raises the feathers on his back, throws his head back onto his back with the bill forward, and inflates his crop. He makes occasional deep "chump" sounds, followed by a low "humm," and accompanied by a rapid vibration of his tail feathers. During the strut his facial skin engorges and the colors intensify, especially the white forehead. 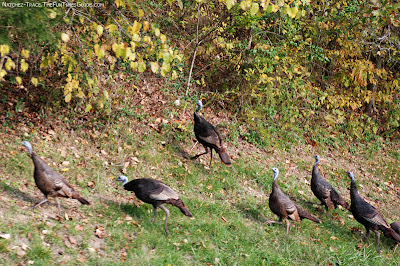 ﻿Baby turkeys are called "poults." The male Wild Turkey provides no parental care. When the eggs hatch, the chicks follow the female. She feeds them for a few days, but they quickly learn to feed themselves. Several hens and their broods may join up into bands of more than 30 birds. Winter groups have been seen to exceed 200.
The Wild turkey was a main part of Native Americans and early settlers diet. By 1857, there were no more Wild turkey's in Massachusetts due to over hunting. In 1972 and 1973, the Massachusetts Department of Wildlife released 37Wild turkey's that were captured in New York into western Massachusetts. These turkeys survived and bred and between 1979 and 1996, Mass wildlife officials trapped more than 500 turkeys in the Berkshires(western Mass) and released them elsewhere in the state. Today, there are an estimated 20,000 Wild turkeys in Massachusetts
Posted by Mr. Williams at 5:14 AM