Bird of the Week X

This week's "Bird of the Week" is the Dark-eyed junco. The Junco is a medium sized sparrow that is gray with a black hood and a white belly. It has white, outer tail feathers that are quite visible when it flies. It's eyes are dark, it's legs are pink, and it's bill is "whiteish". The male and females look similar with the females being a little more paler and browner. 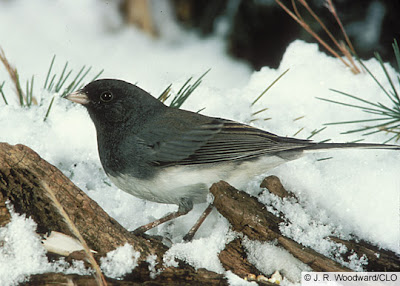 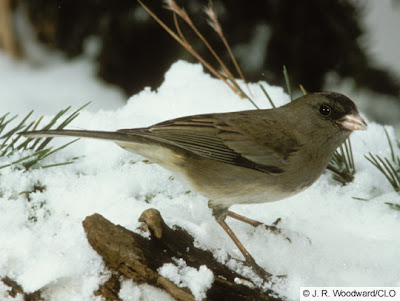 Junco's are the "snowbirds" of our area, appearing around here only in the winter. They are very common at back yard bird feeders and will sometimes appear in flocks of 25 birds or more. The Junco feeds primarily on the ground, scratching the ground looking for insects and seeds.

Photos taken from All About Birds.
Posted by Mr. Williams at 5:25 AM

I was searching for a pic of this bird at my feeder after a snow storm. I am in CT, Jan. 2011. You popped up on google! thanks, Lee-Ann

I, too, was looking to identify the birds on my snow-covered deck. I scattered some seed for them and took to Google to find out what they were. Juncos. Thank you! -Southeast, NH