Bird of the Week XXlV 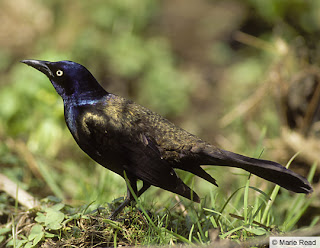 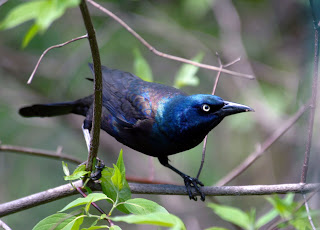 This week's "Bird of the Week" is the Common grackle. The Common grackle is a large blackbird, approximately 12 inches long with a wingspan of about 16 inches. It is an iridescent black all over with a long tail that looks keel-like in flight. It's eyes are yellow and it has a fairly long, black bill. The head, neck, and breast are a glossy, purplish-green or blue. The female is slightly smaller and less glossy than the male. It's song is a harsh, unmusical "readle-eak," like a rusty gate
It spends the winter in southern United States and is one of the earliest returning migrant birds, often returning in March along with flocks of Red-winged blackbirds. It forages (eats) on ground, often in large flocks with other blackbirds where it will eat insects, other invertebrates, grain, seeds, acorns, and fruit. The Common Grackle is an opportunistic forager (hunter of food), taking advantage of whatever food sources it can find. It will follow plows for invertebrates and mice, wade into water to catch small fish, and sometimes kill and eat other birds at bird feeders.
The Common grackle breeds in much of central and eastern United States and Canada, living in a variety of open areas with scattered trees, including open woodland, boreal forest, swamps, marshes, agricultural areas, urban residential areas, and parks.

Labels: Bird of the Week XXlV