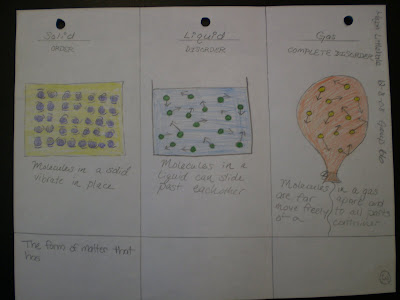 We have begun a study of Matter. Matter is anything that has weight and takes up space. Matter is made up of tiny bits called molecules. Molecules are made up of even tinier particles called atoms. Matter can be found in 4 states, or phases. Solids, liquids, gases, or plasma. The students had the chance to do a little bit of role playing. They played the roles of the molecules in a solid, liquid, and gas. It was really interesting to see the kids figure out that when they were a gas they could spread out and have more energy. It was especially funny when they were a solid and had to gather really close together.
We drew illustrations of how the arrangements of molecules in solids, liquids, and gases are different from one another. The molecules of a solid are packed tightly together and they cannot change position, they vibrate in place. The molecules of a liquid are further apart from one another than in a solid and can slide past each other and change position. This is why liquids take the shape of the container they are in. The molecules of a gas are even further apart than those of a liquid and they can easily spread out to all parts of a container.
Some similarities about the molecules in solids, liquids, and gases are that they all have energy, they all move, and that there is space between the molecules.
We have begun exploring what happens to solids, liquids, and gases when thermal (heat) energy is added or what happens when heat energy is taken away (made cooler). To demonstrate thermal expansion and thermal contraction, we did the Ball & Ring demonstration. Take a look at the video of it!
Posted by Mr. Williams at 7:11 AM